It wasn’t until Gordana Loleska’s son David was 14 years old that doctors in their native North Macedonia diagnosed his kidney, vision, and hearing problems as Alport syndrome.

Although she had known for years that something was wrong, the news that David would battle a lifelong rare disease devastated the single mother of three, plunging her into a depression that was hard to shake. Concerned friends suggested she take her mind off her situation by helping others. “They advised me to become active in the rare disease movement,” said Loleska, who is from Ohrid, a picturesque lake resort of 42,000 in her county’s southwestern mountains.

Four years later, the postal worker has developed a reputation as a champion of raising awareness of rare diseases. Much of her success has come from promotions too glitzy for the public to ignore.

Three promotions involved a Rare Disease Day flag. Friends took it to the bottom of Lake Ohrid, the Balkans’ deepest lake, to the top of Europe’s highest mountain — Switzerland’s Mount Blanc — and high above Loleska’s hometown on a glider.

Another promotion was coaxing a Macedonian radio-industry figure into creating a rare disease song.

Loleska’s latest extravaganza was persuading her nation’s postal authorities to issue the world’s first rare disease stamp, and then the first stamp commemorating Alport syndrome. Philatelists from across the globe have joined Macedonians in buying them.

“The idea of a rare disease stamp came to me when I woke up in the middle of the night needing a drink of water,” said Loleska, who spent a year researching whether another country had issued such a stamp. None had, so she began a two-year process of persuading postal officials to approve the issue. “From the design to the printing took three months.”

The Macedonian Academy of Sciences and Arts — a major supporter of the rare disease cause — held a gala in October 2017 to kick off sales of the “Rare Disease Day” stamp.

The stamp honoring children with Alport syndrome came out this June, just a day after North Macedonia’s rare disease assocation, Life With Challenges, wrapped up its annual meeting in Struga, a mountain resort near Ohrid. Collectors can order both stamps by emailing the North Macedonian Postal System at [email protected] or [email protected]

The activist mom has sandwiched more traditional promotions, such as long-distance runs, between the ultra-imaginative ones. But even in those cases, she’s looked for ways to add pizzazz.

She spiced up a 10-kilometer race, for example, by asking Health Minister Venko Filipce to run with a rare disease T-shirt. His participation thrilled rare disease patients because Filipce is the country’s most important figure in instituting healthcare policies that can help them. It heartens Loleska that her three children — David, now 18, his fraternal twin Andrey, and daughter Ema, 24 — take part in many of these promotions. Life With Challenges gave Loleska the flag that has featured in the events.

For years, Ohrid has had a tradition of anchoring a Christmas tree in its lake bed, then having scuba divers deck it out with ornaments. The lake is a UNESCO World Heritage Site, partly because its water is clear enough to see all the way to the bottom. This makes the decorated tree a magnet for tourists and locals alike.

To cash in on its allure, Loleska has persuaded the local Amfora diving club to take the rare disease flag down to the submerged tree every year for photographs.

“It gets wet,” she admitted, but it dries quickly — and the payoff is terrific publicity for the cause. “We have now made taking the flag to the tree at the bottom of the lake a tradition for children with rare diseases.” 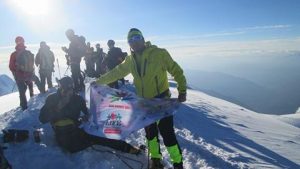 Finding someone to take it to the top of a mountain also was no problem. One of Loleska’s co-workers at the Ohrid post office is Misko Taneski, who has scaled many of Europe’s tallest peaks. A photo that a fellow climber took of him completing Loleska’s mission on the top of Mount Blanc shows Taneski holding the unfurled rare disease flag against a backdrop of blinding rays from the sun.

Another well-known local, Kristiyan Temelkovski, took the flag flapping above Lake Ohrid on his hang glider.

Loleska tasked Saso Mitan, a celebrated Ohrid journalist, musician, and owner of radio stations, with creating the rare disease song. He asked music studio owner and composer Jovica Karajlievski to compose the melody, and he wrote the lyrics. The result was the uplifting “We Are All the Same,” sung by the Ohrid Superstar Band.

Although she has received a lot of fanfare for her promotions, Loleska said all have been a team effort.

“I am grateful to everyone who has taken part in these events to raise the visibility of rare diseases,” she said. “It wouldn’t have happened without them.”

Hal Foster, PhD Hal Foster is a veteran journalist at the Los Angeles Times and other news organizations in the United States and Japan, and a longtime journalism professor. In addition to the LA Times, he worked at the Portland Oregonian and the Seattle Post-Intelligencer, was executive editor of Pacific Stars & Stripes in Tokyo, and wrote about the war in Ukraine for USA Today. He has a Ph.D. in journalism from the University of North Carolina, and has taught in the United States, Kazakhstan and Ukraine, where he was a Fulbright scholar.